5 Types of Dumplings from Around the World

Dumplings are one of the most instantly recognizable of all food items, consisting of a thin piece of dough wrapped around a tasty filling. While many people associate dumplings exclusively with Chinese cuisine, the fact is dumplings are a staple in many cultures.

In honor of National Dumpling Day, this article takes a closer look at five different types of dumplings from around the world.

Xiao long bao are a type of Chinese dumpling hailing from Shanghai. Xiao long bao differ from traditional pork dumplings in one key way: the inside of the dumping also contains a small amount of rich, delicious soup broth. For this reason, xiao long bao are also commonly referred to as soup dumplings.

Xiao long bao are traditionally served in a piping hot bamboo steamer. To eat a xiao long bao properly, you must first give it time to cool to a manageable temperature before transferring the dumpling to a spoon. You may then use your chopsticks to poke a hole in the dumplings side, releasing the broth. Alternately, you can pop the whole dumpling in your mouth, savoring the rush of broth as you bite through the soft dough. They are always served with black vinegar, and it's not uncommon to see locals strolling the Nanshi district of Shanghai drinking soup from some of the larger varieties of xiao long bao with a straw.

On the surface, the Indian dumpling known as a modak may look much like its savory counterparts from other countries. Yet on the inside of the rice or wheat flour wrapper is a sweet filling made from fresh coconut and a type of raw sugar known as jaggery. Modak is commonly associated with the Hindu god Ganesha and is traditionally served during the related festival of Ganesh Chaturthi.

Manti are a type of dumpling hailing from Central Asia, commonly eaten in such countries as Turkey, Kazakhstan, and northwestern China. Food historians surmise that the dish may have originated during the reign of the Mongol Empire, with references to these dumplings dating as far back as the year 1330.

Manti may be stuffed with a variety of different fillings, including beef, lamb, quail, or chicken. Alternately, the steamed or boiled dumplings may be left unfilled. Regardless, manti are traditionally served with melted butter, red pepper, and a side of yogurt.

The key point of difference lies in the sauce used to flavor the cooked dumplings. Siomay is often served with a spicy peanut sauce, and drizzled with citrus juice. The filling may vary from dumpling to dumpling. That said, most siomay contain a filling made using king mackerel fish.

Dumplings are a staple food in the eastern European country of Georgia. One of the country's most distinctive food items is a type of dumpling known as khinkali. Khinkali are most commonly stuffed with a spiced mixture of pork and beef, although lamb or even Imeretian cheese may also be used. Most versions of khinkali even contain a portion of broth, much like xiao long bao.

The top of a khinkali has a distinctive twisted shape. This doughy knob, traditionally used as the handle for picking up the dumpling while is hot, is known by Georgians as either the "kudi" or the "kuchi," words that mean hat and belly button respectively. In either case, this portion of the dumping is never eaten, but is rather left behind on the plate as visual proof of how many dumplings were eaten.

Diners typically bite a small hole in the bottom of the khinkali, suck out the hot soup, and then dig in on the dough and filling.

Would you like to join the conversation? Stay up-to-date with content like this by signing up for our newsletter, or get all the details on ovens from Blodgett-Combi by reading our digital catalog. 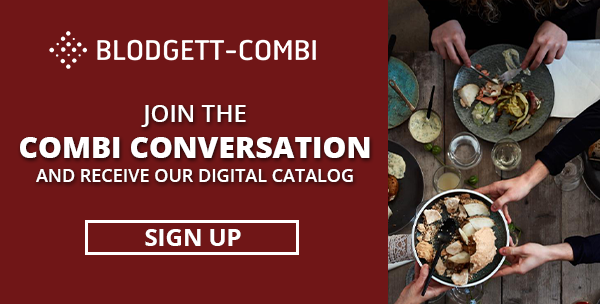